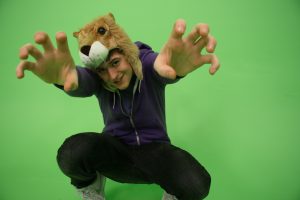 Unicorn Kid is a brand new artist from Scotland whose making a big impression on the music scene with his blend of pop, happy hardcore, and electro. The Scottish school boy talks to music.co.uk fresh from the exam room, and with a U.K tour in prospect.

My name is Unicorn Kid. I can’t really remember why I chose the name;
but I think it’s really great. It reflects the weird and fun nature of my music.

2 – What stage are you at in your career at the moment?

I left school a few weeks ago and have been accepted to art school in Edinburgh, but I am going to defer the entry and pursue this full time. I suppose you could say that I’m at the stage in my career where it’s successful enough to validate taking a bit of time off to see where it goes, and I reckon it can only get better from here.

3 – What is your music background? (Who are you and your band members? Tell
us your story!)

Unicorn Kid comprises entirely of me! I’ve been playing instruments since I was around 5 years old when I took up the keyboard, since then I’ve tried a bunch of different instruments, including the recorder! Unicorn Kid basically started with me layering various melodies and drum patterns from my Casio VL-1 keyboard to make 2 minute tracks. The tunes weren’t very good but I got a little bit of interest on My Space from them. Over time I’ve progressed to professional sequencing software and the music has changed a lot from what it originally was. The influence and ideas behind my music remain the same, and you can hear that when you compare old and new material.

4 – How do you describe your music to people?

My music follows the aesthetic of the chiptune music scene, which is essentially a group of musicians who create music with video game hardware. Though my music differs from this in that I don’t actually use consoles to create my music, I use modern sequencers. I tend to go under ‘Gamewave’ which is a genre born in the early 1990s, it loosely encompasses musicians whose music is heavily influenced by video games.

5 – What do you think about people downloading music online?

I appreciate it a lot when my fans purchase my music online, it does annoy me when I see things on torrent websites just after release, but I suppose it’s the nature of the internet. Buying music helps to support the artist in what they are doing, and that is important, after all it is their career.

6 – What dream tour would you love to be on, with any past or present bands?

I go on about this quite a lot in interviews, but I am a huge fan of Lady Gaga so I would love to tour with her. Also, Cyndi Lauper would be good too. I think it’s difficult for me to think of other artists who I would go well with, because my music is so different to everything else out there at the moment.

7 – What have been the biggest obstacles for you, to get your music heard?

The past two years have been fairly good to me. I have worked extremely hard to get where I am now, with a large portion of that work taking place on the internet through social networking websites, communicating and interacting with fans. I have also been gigging on weekends between school, and spending a lot of time at home producing music. Now that I am finished with school, I’m able to concentrate all
of my energy into taking Unicorn Kid to an even bigger audience.

8 – What is the best freebie you have ever been given?

I’ve not really had any freebies yet! A few t shirts and CDs and stuff along the way but nothing major. I was given a bracelet in London made by a fan once; it was all beaded with my name in letters, that was very cool.

9 – Everyone has a song that annoyingly sticks in their head, what is yours
at the moment?

Cyndi Lauper – Into The Nightlife! It’s not annoying though, the chorus is so good, it’s one of those songs that makes your heart stop a bit when you hear it.

A band called Anamanaguchi from New York are doing really well at the moment. It’s a crazy blend of punk and 8 bit. Everybody should go and check it out.

90% of my free time is spent doing Unicorn Kid. I am always working on graphics, songs, or frantically trying to finish things for my live set. It’s been especially hectic lately with my tour coming up. I just had new equipment and software delivered this morning and I have to learn how to use it all over the next few weeks. Although it might take up all of my free time, it’s something that I love doing and I would hate to give up at this stage.

12 – Have you discovered any interesting music related sites online?

Popjustice.com! Peter Robinson is hilarious and I have been referred to so many amazing pop tunes through it. Hypem.com is also great for finding new music; it gives great suggestions depending on what you’re searching for.

13 – Which comes first, the music or the lyrics?

Well, I’m entirely instrumental so I’d have to say the music. The wild
melodies kind of replace a vocal line though, which often do come first.

14 – Tell us about your next gigs and why we should be there!

I’m touring all over the UK throughout June, you can check out my My Space page for all the dates. I like to get active on stage, there’s no fun in standing behind a laptop so I tend to get really involved. I’ve been known to stage dive and let the crowd invade the stage. It’s all part of the live performance. Also, I wear a lion hat.

15 – Interview questions can be quite dull, so what do you really want to be
to talking about now?

Actually these questions were better than a lot that I’ve had, but I’m a bit tired now, I had a geography exam today you see. Is it alright if I just stop talking?

There you have it, 15 questions according to Unicorn Kid. If you’d like to find out more then visit www.myspace.com/unicornkid or check him out on his U.K and American tours. We’ve had a listen to his music, and it’s a lot of fun, so definitely worth a listen. Also keep your eyes open for Unicorn Kids new video, which uses the latest technology from a company called Popmorphic to produce an interactive video and game. Visit www.popmorphic.com for more details. Or check out our article here.