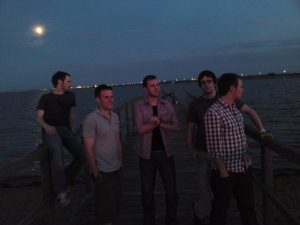 By all accounts, Colchester based indie band Maheno Wreck have had a pretty good start to 2010. The five piece have just supported Seven Summers at their album launch, and reached the next regional round of the Live and Unsigned Competition, which takes place on March 6th in Basildon. They seem to be making an impact on the music scene, but what will they do with our 15 questions? Read on to find out!

How would you describe your act, in the style of an advert?

The Maheno Wreck –  your soundtrack to the summer….and the other seasons.

If you could read one newspaper headline about yourselves in 2010, what would it be?

If a radio station gave you control of their shows and playlists for a day, what would you do?

We would play all unsigned material. Ask listeners to text or call in for their band, from which we would locate their myspace, and play their best songs across the UK.

You decide to plan a launch for your new album/single release, what would your ideal event be?

The launch would be from where we began, our starting point. Barbecues on Frasier island in Australia, with an open air concert. Or a foam party at Chinnerys – Southend on Sea. Free entry and cheap drinks for one and all!

What’s the most valuable lesson you’ve learnt about the music industry?

To take it as it comes. There is a one in a million chance we will make it, and its all about having the publicity to promote your songs, or getting lucky. There are so many talented musicians out there who don’t and won’t get a look in. We will just continue playing and performing, with an “if it happens, it happens” attitude, but hey, if it does, – awesome.

Are there any instruments or other music related skills you’d like to pick up or improve on?

We have been thinking about adding a synthesizer – but there’s quite a few new bands using this at the moment, – we have used piano in the past, but we think our music is changing direction now, and we seem to be using more delays and different rhythm structures.

You’re asked to design/come up with something to giveaway to fans at your gigs, what would it be?

What was the last thing you googled online?

A new band called “The Crooks” – we are playing Barhouse, Chelmsford with them on 14th April. They have had MTV coverage and are from Sheffield.

Have you any funny ‘You’ve Been Framed’ style stories you can share with us?

Who would you most like to interview and what would you ask them?

Do you still buy CD singles/albums, or is it all about downloads?

Downloads – but we did enjoy the process of making and designing our first album. So we do appreciate the tangible quality of an album sleeve/booklet.

Who do you think we should watch out music wise this year?

London Blackmarket – played a tiny venue in Colchester and really impressed us.

How would you promote the British music scene abroad?

Emphasize all the great British bands throughout the decades!!

And finally what else should we know about your act?

3 song writers – chequered shirts – we call our drummer Watkins, for no apparent reason – we’re a quintet – we used to rehearse in a building site (weird, but true).

Check out Maheno Wreck live throughout London and The South East in 2010. For gig dates, and all their latest songs, visit www.myspace.com/themahenowreck.