What first got you interested in music?
I honestly have no idea! There was always music on in our house when I was a kid. Maybe that had something to do with it. It was when I was at college I started to get really interested in the business of it though. I do remember going to a lot of badly organised gigs and thinking that I could do it so much better.

What prized possessions do you have in your music collection?
I have loads. All my CDs are important. I’ve got a Take That Platinum Disc thing though which is pretty awesome, and some rare signed albums that are worth a bit. I’m not telling you who they are, or how much they’re worth for fear of being burgled! I’ve got a nice collection of guitar picks I’ve collected from various gigs over the years as well they’re quite cool.

What do you enjoy doing outside of music?
Most of the stuff I do involves music in some way. Other than that I like playing with my little dog, and spending time with family and friends.

How did you first get interested in music promotions?
It started from handing out flyers at gigs years ago for bands I liked, and trying to get people to watch them. I guess it was like an early incarnation of the street teams we get today. I get so excited when I see a great band; I just have to tell as many people as possible about them. There’s something really exciting about discovering a band when they just start, and then seeing them be successful and know you had a part to play in that.

What do you see as the music promoter’s role? Do you think anyone can do it?
The main role is making whatever it is you’re promoting a success, be it making sure you sell enough tickets to a gig you’re putting on, or making sure the band you’re working with are getting enough shows, interest from media, and generating a fan base. I wouldn’t say anyone could do it. It can be a really time consuming, tedious thing, constantly emailing and calling people to make sure your ‘product’ is seen in enough places. You have to have a lot of patience. You do spend a lot of time on the phone and emailing people, so you have to have pretty good people skills as well. And above all you really need to be passionate about it, otherwise you’d get bored.

Any special story behind your promoter/gig night names?
They don’t really have names. The company is named after our dog though, cos he is a crazy pug!

What is your own personal background in music promotion?
I started off just running a small pop promotions website. I just used to go to showcases and see new bands; if I liked them I’d feature them. Pretty soon I was getting people approaching me to be on it, and it started generating a lot of traffic. I even had a few record company A&R people call me off the back of it, and ask me in for interviews. I was pretty young at the time though, and being female in the industry was a hindrance, so nothing much came of it. I co-managed a boy band for a little while after that, and then went back to working in a small music venue where I lived. I was booking all the bands that played there, doing all the promotion and the website, and sometimes even the sound, as well as managing a few acts on the side that were pretty successful in the area. I do have music industry qualifications as well in PR, Promotion and Marketing.

From your point of view what are the good points and bad points?
The good points are the satisfaction of hearing someone rave about a band you’re promoting, or how good a night they’ve had at your gig. The fact you get to see a lot of awesome bands play and get paid for it, and spending your days doing something you love. Bad points are the tediousness of some of it, getting frustrated when you can’t book a band that you really want to get, long hours, and people are always wanting free tickets out of you!!!

Do you have a proudest moment?
Putting on our first major gig was a pretty proud moment, and seeing a band I did a lot of promotion for play at Wembley Arena, that was amazing! Being there from when they did gigs in front of about 5 people, to seeing them in front of 1000s of screaming girlies was awesome, I felt so proud.

Any favourite bands you’ve booked, that we should all check out?
Viking Skull are amazing. Also check out Heavens Basement, and Not Advised – who are quite possibly one of the most exciting live bands I’ve ever seen.

What would your ultimate Band/DJ line-up be for a gig?
That is the million dollar question!! Probably acts like Metallica, Papa Roach, Buckcherry, Steel Panther, Simple Plan, Heavens Basement and Not Advised. That would be an awesome gig something for everyone there!!

What can we look forward to from you guys for the rest of 2009 and into 2010?
I’m in the stages of organising an Oi! Punk and Ska Mini Festival hopefully in Feb or over Easter weekend. I’m also going to start a monthly unsigned band night, doing a different genre every month which I’m loving sorting out. I’ve found some absolutely amazing bands to play, so I’m really looking forward to that starting.

If you could design the ultimate venue to hold a gig in, what would it be like?
I don’t like big venues. I like the intimacy of a small gig so it wouldn’t be massive. I’d want it all music themed with posters and memorabilia in it and ideally in a basement, with the stage in the middle, so wherever you are you get a good view! 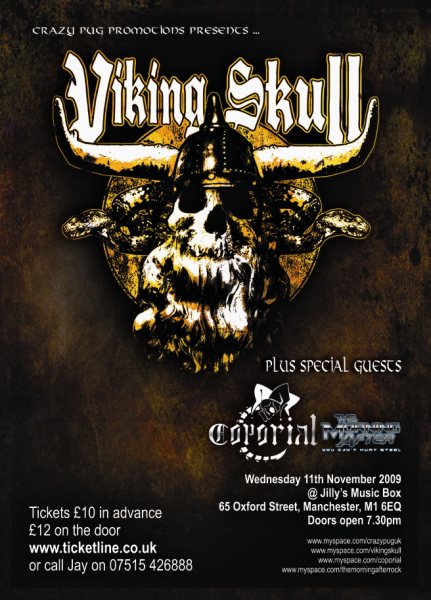